Discovery and Translation of the Cell Membrane Coating Nanotechnology

The emerging nanotechnology in biomedicine has sparked new hope for the treatment and diagnosis of various important human diseases. However, development of functional nanomaterials and nanomachines can be encumbered by unanticipated material properties and biological events, which can negatively impact their effectiveness when introduced into complex, physiologically relevant systems. Herein, the preparation of nanodevices enclosed in the plasma membrane of natural human cells is reported. The resulting cell membrane-coated nanodevices are demonstrated to possess many surface functions of natural cells via studies of interactions with plasma proteins, cells, tissues, and microorganisms. Such multifaceted cell-mimicking properties can be attributed to the preservation of biomembrane on nanodevice surfaces, which facilitates the display of intricate biochemistry that is difficult to replicate using conventional functionalization approaches. As the platform is entirely biocompatible and biodegradable, it can be applied toward a myriad of biomedical applications, including drug delivery, detoxification and vaccination, where the vast implications of cell surface properties benefit a variety of disease treatments. 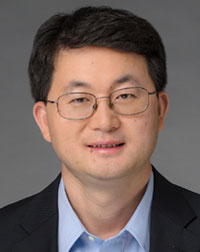 Dr. Liangfang Zhang received his B.E. and M.S. degrees in Chemical Engineering from Tsinghua University, and his Ph.D. in Chemical & Biomolecular Engineering from the University of Illinois at Urbana-Champaign in 2006 under the supervision of Prof. Steve Granick. He was a postdoctoral associate in the laboratory of Prof. Robert Langer at MIT during 2006-2008. He joined the Department of Nanoengineering at UC San Diego as an Assistant Professor in July 2008 and was promoted Professor in July 2014. Dr. Zhang’s research interests focus on biomimetic nanomedicine, with a particular interest in creating and evaluating nanostructured biomaterials for drug delivery, detoxification and vaccination for treatment of infectious diseases and cancer. He has published 198 peer-reviewed articles and holds 98 issued/pending patents. He received the ACS Victor K. LaMer Award (2009), UCSD Jacobs School of Engineering Best Teacher Award (2011), ACS Unilever Award (2012), MIT Technology Review’s TR35 Innovator Award (2013), AIChE Allan P. Colburn Award (2014), AIMBE Fellow (2015), Popular Science’s Brilliant 10 Award (2016), U.S. Department of State ASPIRE Award (2017), Kabiller Young Investigator Award (2017), and AAAS Fellow (2018).