Wireless small-scale medical robots have the potential to revolutionize healthcare, since they have the unique capability of non-invasive access and operation inside hard-to-reach and unprecedented small spaces inside the human body. However, due to miniaturization limitations on on-board actuation, powering, sensing, computing and communication, new methods need to be introduced in creating such tiny robots. First, cell-driven biohybrid microrobots are proposed, where a synthetic microswimmer is driven by attached biological microorganisms (bacteria and microalgae). Such biohybrid microswimmers loaded with drugs are shown in vitro to deliver drugs actively and locally to cancerous tissues. Next, external magnetic fields are used to derive and steer a wireless soft-bodied magnetic millirobot inspired by soft-bodied small animals. Such robot is demonstrated to be able to have seven locomotion modalities to be able to navigate in complex environments, such as inside the human body. Also, a baby jellyfish-inspired soft swimmer is shown to realize many diverse functions by controlling the local fluidic flow around them towards medical use. 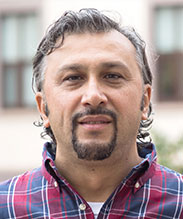 Metin Sitti received PhD degree in electrical engineering from University of Tokyo, Japan in 1999. He was a research scientist at UC Berkeley during 1999-2002 and a professor at Carnegie Mellon University during 2002-2016. Since 2014, he has been the director of Physical Intelligence Department at Max Planck Institute for Intelligent Systems in Stuttgart, Germany. His research aims to create new small-scale, wireless, physically intelligent, bio-inspired, soft and multifunctional robots for translational medical applications. He is an IEEE Fellow. He received ERC Advanced Grant in 2019, Rahmi Koç Science Prize in 2018, SPIE Nanoengineering Pioneer Award in 2011 and NSF CAREER Award in 2005. He founded nanoGriptech Inc. in 2009 to commercialize gecko-inspired microfiber adhesives. He received many best paper awards in conferences, e.g., the best paper award in Robotics Science & Systems Conference in 2019. He is the editor-in-chief of Progress in Biomedical Engineering and Journal of Micro-Bio Robotics.