Regular and irregular rhythms of the heart are emergent properties from complex interactions across multiple scales, from the genetic and molecular, to the whole cell and multicellular tissue, and to the whole heart. In the last decade, much has been learned about the genetic and molecular basis of hereditary cardiac arrhythmias, but much less is known about the actual arrhythmic substrate in patients with these disorders. Many of these arrhythmias arise from abnormal ion-channel function (“channelopathies”), caused by mutations and altered molecular structure. Ion-channel function is determined by the gating movement of its molecular structure. Yet, molecular dynamics and electrophysiology were never combined computationally to link molecular structure to function. In my presentation I will introduce a computational biology approach for simulating the structural dynamics of an ion channel protein during gating and the resulting function in terms of channel current, whole – cell action potential, and electrocardiographic waveforms. I will apply this approach to simulate mutations in Kv7.1, the alpha subunit of IKs – the slow delayed rectifier potassium channel that participates in cardiac action potential repolarization. These mutations cause the clinical Long QT Syndrome that predisposes patients to cardiac arrhythmia and sudden death. At the level of the whole heart, I will use our novel noninvasive imaging modality (Electrocardiographic Imaging, ECGI) to provide insight into the electrophysiologic substrate in patients with hereditary cardiac arrhythmias, specifically the Early Repolarization syndrome and if time permits Long QT and Brugada syndromes. 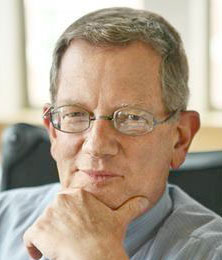 Professor Rudy came to Washington University in St. Louis in 2004 from Case Western Reserve University, where he had been a member of the faculty and director of the Cardiac Bioelectricity Research and Training Center since 1980.

Professor Rudy published over 300 scientific articles. He graduated 40 doctoral students, who continue to pursue careers in academic research and medicine and in the biomedical industry.