Radionuclide scanning images published in Nature by Di Chiro in 1964 showed a downward migration along the spinal canal of particle tracers injected in the brain ventricles while also showing an upward flow of tracers injected in the lumbar region of the canal. These observations, since then corroborated by many radiological measurements, have been the basis for the hypothesis that there must be an active circulation mechanism associated with the transport of cerebrospinal fluid (CSF) deep down in the spinal canal that subsequently returns a portion back to the cranial vault. However, to date, there has been no physical explanation for the mechanism responsible for the establishment of this bulk recirculating motion that is essential for the proper function of the CNS. To investigate the origin and characteristics of this recirculating flow and its implication in various diseases of the CNS, we have analyzed the motion of the CSF in the subarachnoid space of the spinal canal. We show that the balance between the local acceleration and viscous forces produces a leading-order flow consisting of pure oscillatory motion with axial velocities of the order of a few centimeters per second and amplitudes monotonically decreasing as one moves downward along the length of the canal. We demonstrate that the nonlinear term associated with the convective acceleration contributes to a second-order correction consisting of a steady streaming that generates a bulk recirculating motion of the CSF along the length of the canal with characteristic velocities two orders of magnitude smaller than the leading-order oscillatory flow. The results of the analysis are shown to be in excellent agreement not only with experimental measurements in an in-vitro model, but also with radiological measurements conducted in human adults. The model predictions of the motion of the CSF are then used to optimize intrathecal drug delivery systems (injection of chemotherapy or pain medication directly into the CSF) and in the early diagnosis of idiopathic Normal Pressure Hydrocephalus (a treatable form of adult senility). 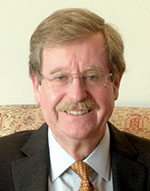 Juan C. Lasheras is the Stanford S. and Beverly P. Penner Professor of Engineering and Applied Sciences at the University of California, San Diego Jacobs School of Engineering. He is a distinguished professor of Mechanical and Aerospace Engineering and Bioengineering, Director of the Center for Medical Devices and Instrumentation at the Institute of Engineering in Medicine, and Co-Director of the Master of Advanced Study Program in Medical Device Engineering. He is a member of the National Academy of Engineering of the USA, the National Academy of Inventors of the USA, the Royal Academy of Engineering of Spain (Real Académia de Ingeniería de España), and a Fellow of the American Physical Society (APS). He was a Guggenheim Fellow and a George Van Ness-Lothrop Fellow, and served in 2010 as the Chairman of the Division of Fluid Dynamics of the APS. He was awarded Doctor Honoris Causa degrees from the Universidad Carlos III de Madrid, Spain and from the Universidad Politécnica de Madrid, Spain. Lasheras holds 52 US patents in medical devices technology and was the recipient of the F.N. Frenkiel Award for Fluid Dynamics from the American Physical Society (APS) in 1990, and the 2003 Breakthrough Innovation in Medical Sciences given by BIOCOM. He received his Ph.D from Princeton University in 1982.