Current treatments of neurological and neurodegenerative diseases are limited due to the lack of a truly non-invasive, transient, and regionally selective brain drug delivery method. The brain is particularly difficult to deliver drugs to because of the blood-brain barrier (BBB). The impermeability of the BBB is due to the tight junctions connecting adjacent endothelial cells and highly regulatory transport systems of the endothelial cell membranes. The main function of the BBB is ion and volume regulation to ensure conditions necessary for proper synaptic and axonal signaling. However, the same permeability properties that keep the brain healthy also constitute the cause of the tremendous obstacles posed in its pharmacological treatment. The BBB prevents most neurologically active drugs from entering the brain and, as a result, has been isolated as the rate-limiting factor in brain drug delivery. Until a solution to the trans-BBB delivery problem is found, treatments of neurological diseases will remain impeded. Over the past decade, methods that combine Focused Ultrasound (FUS) and microbubbles have been shown to offer the unique capability of noninvasively, locally and transiently open the BBB so as to treat central nervous system (CNS) diseases. Four of the main challenges that have been taken on by our group and discussed in this paper are: 1) assess its safety profile, 2) unveil the mechanism by which the BBB opens and closes, 3) control and predict the opened BBB properties and duration of the opening and 4) assess its potential in neurotherapeutics. All these challenges will be discussed, findings in both small (mice) and large (non-human primates) animals will be shown as well as its clinical potential. Focused ultrasound (FUS) neuromodulation has previously been proposed as a promising technique to drive neuronal activity and has been shown throughout a breadth of applications including in mice, rats, non-human primates and humans as a novel technique for the noninvasive manipulation of neuronal activity using ultrasound. Our group has demonstrated excitation of both the central (CNS) and peripheral nervous system (PNS). In the CNS, motor- and cognitive-related brain regions of mice were induced by targeting specific brain structures. Higher acoustic pressures increased the success rate. Pupil dilation was observed when neuromodulating regions in the brain covering the superior colliculus and other anxiety-related structures such as hippocampus and locus coeruleus. In the PNS, we showed for the first time stimulation of the sciatic nerve with FUS eliciting a physiological motor response was recorded in vivo. Clipping the sciatic nerve downstream of stimulation eliminated EMG activity during FUS stimulation. Peak-to-peak EMG responses and latencies were comparable to conventional electrical stimulation methods. Histology along with behavioral and thermal testing did not indicate damage to the nerve or surrounding regions. Our studies demonstrated the capability of FUS to modulate target specific regions in both the brain and the peripheral in vivo. 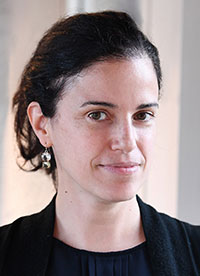 Elisa E. Konofagou is the Robert and Margaret Hariri Professor of Biomedical Engineering and Professor Radiology as well as Director of the Ultrasound and Elasticity Imaging Laboratory at Columbia University in New York City. Her main interests are in the development of novel elasticity imaging techniques and therapeutic ultrasound methods and more notably focused ultrasound in the brain for drug delivery and stimulation, myocardial elastography, electromechanical and pulse wave imaging, harmonic motion imaging with several clinical collaborations in the Columbia Presbyterian Medical Center and elsewhere. Elisa is an Elected Fellow of the American Institute of Biological and Medical Engineering, a member of the IEEE in Engineering in Medicine and Biology, IEEE in Ultrasonics, Ferroelectrics and Frequency Control Society, the Acoustical Society of America and the American Institute of Ultrasound in Medicine. She has co-authored over 225 published articles in the aforementioned fields. Prof. Konofagou is also a technical committee member of the Acoustical Society of America, the International Society of Therapeutic Ultrasound, the IEEE Engineering in Medicine and Biology conference (EMBC), the IEEE International Ultrasonics Symposium and the American Association of Physicists in Medicine (AAPM). Elisa serves as Associate Editor in the journals of IEEE Transactions in Ultrasonics, Ferroelectrics and Frequency Control, Ultrasonic Imaging and Medical Physics, and is recipient of awards such as the CAREER award by the National Science Foundation (NSF), the Nagy award by the National Institutes of Health (NIH) and the IEEE-EMBS Technological Achievement Award as well as additional recognitions by the American Heart Association, the Acoustical Society of America, the American Institute of Ultrasound in Medicine, the American Association of Physicists in Medicine, the Wallace H. Coulter foundation, the Bodossaki foundation, the Society of Photo-optical Instrumentation Engineers (SPIE) and the Radiological Society of North America (RSNA). https://ueil.bme.columbia.edu/