This presentation will start with a review of the various types of ultrasound transducers and their technologies, then introduce the capacitive micromachined ultrasonic transducer (CMUT) and a brief history of its development. This will be followed by a summary of the work necessary to realize devices: theory (analytic solution, finite element modeling); modes of operation (conventional, pull-in); technology (sacrificial release, direct bonding); electronic integration (CMUT on ASIC, flip-chip on ASIC, interposer); packaging (backing, focusing lens); and system integration, and applications. 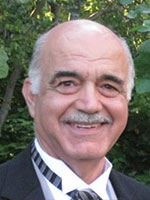 Butrus (Pierre) T. Khuri-Yakub is a Professor of Electrical Engineering at Stanford University. His current research interests include medical ultrasound imaging and therapy, ultrasound neuro-stimulation, chemical/biological sensors, and ultrasonic fluid ejectors. He has authored over 600 publications and has been principal inventor or co-inventor of 104 US and international issued patents. He has received a number of awards including: a Stanford University Outstanding Inventor Award in 2004, Stanford Biodesign Certificate of Appreciation for commitment to educate mentor and inspire Biodesgin Fellows in 2011, recipient of IEEE Rayleigh award 2011, and elected Fellow of the AIMBE in 2015.