Micro- and nanoscale technologies are emerging as powerful tools for controlling the interaction between cells and their surroundings for biological studies, tissue engineering, and cell-based screening. In addition, hydrogel biomaterials have been increasingly used in various tissue engineering applications since they provide cells with a hydrated 3D microenvironment that mimics the native extracellular matrix. In our lab we have developed various approaches to merge microscale techniques with hydrogel biomaterials for directing stem cell differentiation and generating complex 3D tissues. In this talk, I will outline our work in controlling the cell-microenvironment interactions by using patterned hydrogels to direct the differentiation of stem cells. In addition, I will describe the fabrication and the use of microscale hydrogels for tissue engineering by using a ‘bottom-up’ and a ‘top-down’ approach. Top-down approaches for fabricating complex engineered tissues involve the use of miniaturization techniques to control cell-cell interactions or to recreate biomimetic microvascular networks. Our group has also pioneered bottom-up approaches to generate tissues by the assembly of shape-controlled cell-laden microgels (i.e. tissue building blocks), that resemble functional tissue units. In this approach, microgels were fabricated and induced to self assemble to generate 3D tissue structures with controlled microarchitecture and cell-cell interactions. 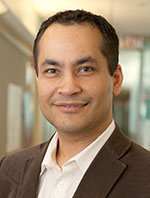 Ali Khademhosseini is Professor of Medicine at Harvard Medical School and Director of the Biomaterials Innovation Research Center at Brigham and Women’s Hospital. He is also a faculty at the Harvard-MIT Division of Health Sciences and Technology as well as an Associate Faculty at the Wyss Institute for Biologically Inspired Engineering and a Junior PI at Japan’s World Premier International-Advanced Institute for Materials Research at Tohoku University where he directs a satellite laboratory. He is recognized as a leader in combining micro- and nano-engineering approaches with advanced biomaterials for regenerative medicine applications. In particular, his laboratory has pioneered numerous technologies and materials for controlling the architecture and function of engineered vascularized tissues. He has authored over 350 journal papers (H-index = 74, ~19300 citations) and 50 books/chapters. In addition, he has delivered 250+ invited/keynote lectures. Dr. Khademhosseini’s interdisciplinary research has been recognized by over 30 major national and international awards. He is a recipient of the Presidential Early Career Award for Scientists and Engineers, the highest honor given by the US government for early career investigators. He is also a fellow of the American Institute of Medical and Biological Engineering (AIMBE) and the American Association for the Advancement of Science (AAAS). Currently he serves on the editorial board of numerous leading journals as well as an Associate Editor for ACS Nano (IF: 12) and a permanent member of NIH BTSS study section. He received his Ph.D. in bioengineering from MIT (2005), and MASc (2001) and BASc (1999) degrees from University of Toronto both in chemical engineering. Read more at: www.tissueeng.net