Neuronal circuit architecture and directional connectivity determine functionality, communication, and computation in the brain. The development of microfluidics and microfabrication technologies made it possible to develop compartmentalized lab-on-chip platforms to grow and manipulate neuronal networks, to address specific questions extending from axonal guidance, synapse formation, or axonal transport, to the development of 2D/3D models for deciphering pathophysiological pathways, or for pharmacological testing and drug screening. This novel approach can be used for almost any type of neuronal circuits or brain disorders and is enabling new insights into neurobiological events previously unachievable through traditional cell biology techniques.

Our team provided the first proof of concept that neuronal populations could be connected in a directional manner by controlling axonal outgrowth through physical constraints using asymmetrical microchannels to guide axons. These "neuronal diodes", can be established with primary neurons from different regions of the brain (e.g. cortex, striatum, hippocampus) and with human neurons obtained by cell-reprogramming (hiPSCs). The technology is adaptable to many experimental settings and readouts, and to parallelization for high-content screening. It has also many applications including the potential to accurately model acute and chronic neurodegeneration. I will present applications of the neuronal diodes to model Alzheimer’s Disease on chip, as part of a drug discovery strategy that led us to found a critical role of the cysteine protease Caspase-2 and to validate on-chip a newly designed selective Caspase-2 inhibitor. 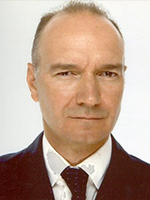 Etienne Jacotot is Research Director at Inserm (Paris, France). He received a B.Sc. in molecular biology and genetics from University Paris 11 Orsay in 1993 and M.Sc. and PhD in immunology from Institut Pasteur and University Paris 11 in 1994 and 1997. He did a post-doctoral training in the Guido Kroemer's lab, where he discovered a mitochondrial target for the HIV-1 Viral protein R, described the role of mitochondria and caspases in HIV Env-mediated syncytial apoptosis, and contributed to the characterization of mitochondrial Apoptosis-Inducing Factor. In 2001, he cofounded and directed for 8 years a VC-funded biotech company where he settled mitochondria-based phenotypic screening platforms, identified Caspase-2 as a target in neonatal brain damage, and managed the preclinical development of a neuroprotective drug candidate. After a Visiting Professor position at Imperial College London (UK) from 2009 to 2014, he joined IBPS - Sorbonne University. His research group develop translational approaches to target Caspase-2 and develops neurofluidic microsystems to control the architecture of neuronal circuits in vitro, in a translational perspective. He contributed to 78 research publications (Hindex = 36; citations: > 10 150) and he is named inventor of 28 patent applications.