Bone Bioengineering has both basic science and clinical significances in many medical fields, such as osteoporosis, osteoarthritis, or intervertebral disc degenerations. I will highlight our development of a three-dimensional imaging analysis and modeling technique for trabecular bone microstructure, its applications in basic science research of bone mechanics, and clinical applications in osteoporosis and osteoarthritis. We will discuss bone microstructural phenotypes in different races and their implications in genetic and precision medicine, anthropology, evolution and mechanobiology of the skeletons. In parallel to these developments, we will also showcase how mechanobiology links to bone microstructure and mechanics. 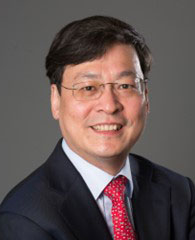 Dr. Guo was born and grew up in China and received his B.S. in Applied Mechanics from Peking University. He continued his graduate studies in the US and received his M.S. in 1990 and Ph.D. in 1994 in Medical Engineering and Medical Physics from Harvard University-MIT. In 1994-1996, Professor Guo did his postdoctoral fellowship in the Orthopaedic Research Laboratories at the University of Michigan at Ann Arbor with Professor Steven A. Goldstein in orthopaedic bioengineering. In 1996 he joined the Department of Mechanical Engineering and then Department of Biomedical Engineering at Columbia University as an Assistant Professor. He was promoted to Associate Professor in 2001, Associate Professor with tenure in 2003, Professor in 2007, and named as Stanley Dicker Professor in 2018. He directs the Bone Bioengineering Laboratory in the Department of Biomedical Engineering at Columbia focusing his research interests in micromechanics of bone tissue, computational biomechanics, and mechanobiology of bone. His past honors include Young Investigator Recognition Award from the Orthopaedic Research Society, National Research Service Award from the US National Institutes of Health (NIH), a CAREER award from the US National Foundation of Science (NSF), Funds for Talented Professionals (Joint Research Fund for Overseas Chinese Young Scholars) from the National Natural Science Foundation of China, and Christopher R Jacobs Award from Biomedical Engineering Society (BMES). He is elected fellow of American Institute for Medical and Biological Engineering, American Society of Mechanical Engineers, BMES, American Society of Bone and Mineral Research, International Combined Orthopaedic Research Societies, and International Academy of Medical and Biological Engineering. He was one of the founders and served as co-Editor-in-Chief of Cellular and Molecular Bioengineering (CMBE), an international journal of BMES. He has served many review panels for NIH, NSF, and NASA. His research has been supported by the Whitaker Foundation, the NSF, and the NIH. He served as President of International Chinese Musculoskeletal Research Society, the Society for Physical Regulation in Biology and Medicine, Member of Board of Directors of Orthopaedic Research Society, and Member of Board of Directors of AIMBE. He also founded the Special Interest Group (SIG) in CMBE at the BMES and served as its founding Chair. Recently, he founded the Northeast BME League and served as it inaugural President.